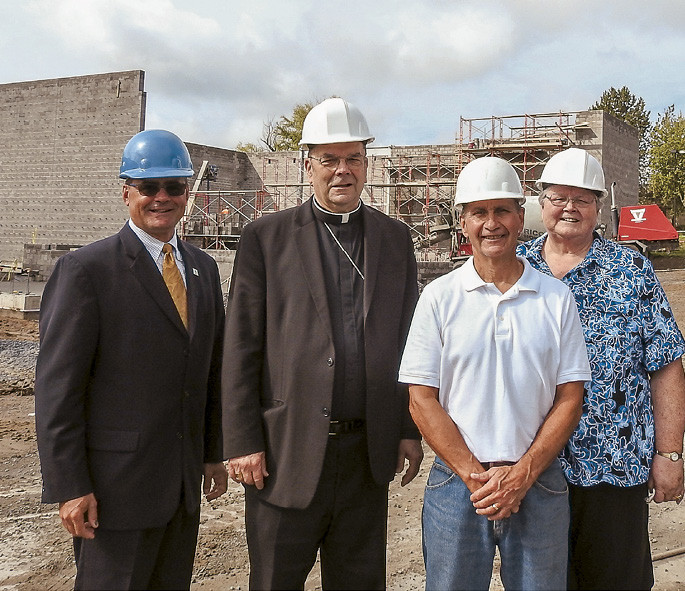 Where there had always been lawn and a gravel driveway at the Notre Dame's Jr./Sr. High campus, the school's imposing new 14,000 square-foot building is taking shape. The new Msgr. Francis J. Willenburg Center is the only new major construction project to take place in decades at any of the Syracuse Diocese schools.

According to Sr. Anna Mae Collins, CSJ, princi­pal, "This new building is named in memory of the beloved priest known throughout Central New York as an advocate for young people and as a devoted fan for many area schools and sports."

Msgr. Willenburg was often described as a "fix­ture" at local athletic events of all types and during his lifetime was inducted into many area sports halls of fame. While serving as parish priest throughout the area, his devotion to those of all ages was well known — from his service as a counselor for the Utica division of the Oneida County Children's Court, to his support of Camp Nazareth, to a board member of Catholic Charities, to a founding board member of St. Joseph's Nursing Home.

In the spirit of Msgr. Willenburg, the center will enhance the experience at Notre Dame's Campus for Catholic Education through arts, athletics and community events. The building features a multi-purpose design and will be a fully functional, independent space with a separate lobby and entrance.

The school, founded in 1960, will now have its first stage to host performing arts events, such as musical theater productions, which historically have been held off-site. The Willenburg Center will provide much needed additional gymnasium space featuring a regulation-size basketball court and bleachers. A concessions area and warming kitchen, restrooms, locker and dressing rooms and office space are also in the plans.

At a groundbreaking ceremony held in May 2016, Board Chairman Jim Joseph said, "Three years ago, we launched the multi-million dollar 'Making our Kids World Ready' capital campaign. We expressed our gratitude for the faith invested in us by the Diocese of Syracuse and the community. A short time later, when I spoke at the Class of 2013's commencement, I looked the graduates in the eyes and told them that when they returned to Notre Dame for their fifth high school reunion as alumni, there would be a beautiful new building to welcome them. Today, we fulfill our promise to the students, alumni, Diocese and the community."

An early proponent of the project was The Good News Foundation of Central New York. The Good News Foundation's mission and vision embody sharing the love of Jesus Christ especially through strengthening families and parishes. On this under-pinning, the nonprofit organization pledged a $4 million matching grant for the capital campaign.

"We committed to an agreement with Notre Dame … to provide up to $4 million dollars … if they would raise a similar amount and we've done this in steps," said Good News Foundation Executive Direc­tor Michael Buckley, Notre Dame Class of 1969.

Another goal of the "Making Our Kids World Ready" capital campaign was to establish the school's endowment fund. With an endowment in place, earnings will create an ongoing stream of tuition assistance for families seeking Catholic education, according to Notre Dame's Chief Financial Officer Ken McCoy. The need for the endowment was confirmed in a 2014 Zogby Analytics Study of the school, which provided the following insight: "The only real impediment to growth is the cost of attendance."

The new building is slated to be operational in time for the 2017-2018 school year. The project has been in good hands with many of those involved already part of the Notre Dame family.

Peter C. Murad, Notre Dame Class of 1980, principal architect with Architectural Resources of Buffalo said, "As a Notre Dame graduate, I am honored to have collaborated with the leadership of the school on the master plan and design. The building's dynamic structural full-glazed facade serves as a beacon on campus, and the architecture embodies the vision of educational excellence and creativity."

Several partners in the project, besides Murad, have their roots at Notre Dame. Joe Salerno, Notre Dame Class of 2000, is the owner of National Building & Restoration of Utica and is serving as general contractor. Clerk-of-the-Works Carson Sorrell's children are Notre Dame graduates.

Salerno said, "It is a great opportunity to have a team whose members are all personally committed to the project. We all have Notre Dame in our hearts, and we're all in this together."

Dyann Nashton is a freelance writer from Oneida, New York.

Return to a complete listing of all news and events.